Posted by Kalorlo in Glass on September 7, 2014

The last two are a pair of pretty transparents. 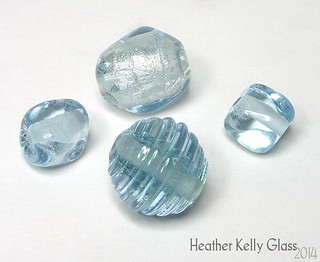 Ice Floe is a lovely pale icy blue. Gorgeous on its own in nuggets. The bead at the back has a base of Effetre clear, rolled in silver leaf and encased in Ice Floe – the silver’s definitely silver, so this could be a handy encasing colour to prevent it going gold. For the ribbed bead, I did a small core of Notos, which has lost most of the iridescence leaving a slightly aqua-tinged centre. Ice Floe did develop some trails of microbubbles in all these beads, but that’s less of a problem in a colour like this – they look watery not scummy. I don’t think I really noticed while making the beads, or I could have tried working it a little differently. 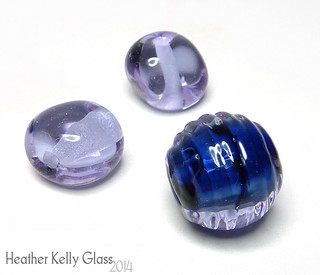 Trapeze is another dark lavender-alike… but this one looks and photographs as purple under halogens rather than blue! It does look *more* purple in sunlight, but it definitely colour-shifts far less than the others. So if that shift annoys you, this is a fab alternative. For the ribbed bead, I encased a base of Double Helix Psyche. That worked much better here than the last time I tried it! 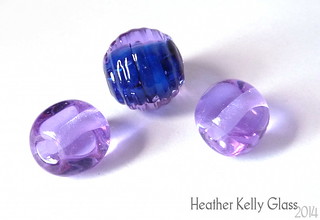 So in sunlight it still has a lot more oomph… but if you weren’t looking at the two pics side-by-side like this, the above one still gives a better impression of the purple than the baby blue you get with dark lavender.

Posted by Kalorlo in Glass on September 7, 2014 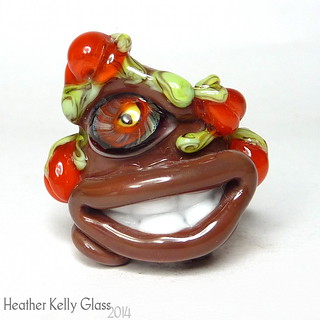 Mahogany is a really nice warm opaque brown, that is properly brown rather than dark red. 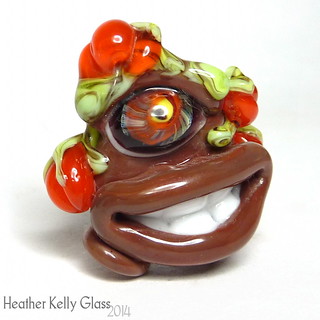 I used Tiger Lily for the pumpkins on this gremlin, and you can see that the opacity varied a lot. Some of the pumpkin segments stayed very transparent. 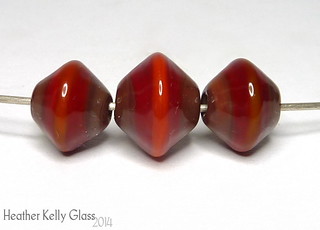 These bicones have a base of Mahogany, with a wrap of Poppy round the centre, and the largest has a thin wrap of Tiger Lily on top of that. This was in the same sessions as the gremlins, so I didn’t actually know they weren’t opaque at that point! Tiger Lily especially looks pretty opaque in the rod. So the result is rather more subtle than I was expecting. 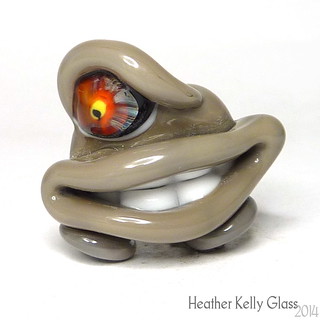 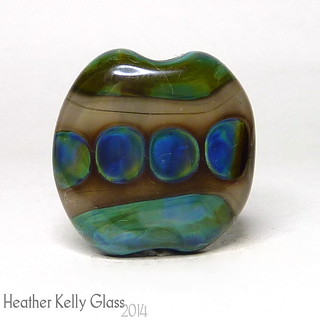 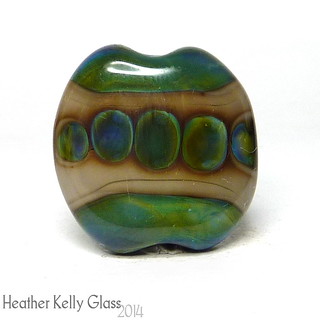 I used Double Helix Okeanos on top of Cobblestone here (unreduced), and got some fab colours! The Cobblestone has fumed darker and browner around the dots especially. Showing both sides, as one is bluer and one greener.

I decided to do more combos with Mahogany. These are small rounds with a tiny core of clear, to make my rod of Mahogany go further. Definitely a true opaque! I wrapped one in fine silver wire, the next has a wrap of SIS, then Cobblestone dots, a spiral of black, and finally spreading dots of Reichenbach Kermit (a special: SPL1000).

I did the same thing with Cobblestone, here you go: 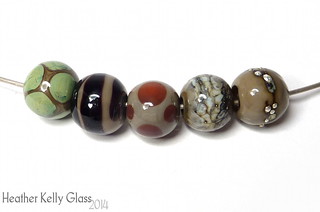 They’re both nice colours to use like this, and look great with each other, both staying crisp in the dots. They are both somewhat reactive with the silver, ivory and green, but not overwhelmingly so.