I finished this tote bag at the end of last week so I could present it to my mum. (It has been sitting around cut out for a while).

I used the Two Tone Fabric Totes tutorial, but there are hundreds of tote bag tutorials available. I picked this one as it was lined and turned inside-out for no interior seams.

Both fabrics here are from the Scrapstore – a pretty birds of paradise upholstery print and a plain aqua which is also the lining. Probably both cotton, of reasonable weight. I didn’t add any other embellishment where the fabrics join because I didn’t think it needed it – the print is big enough on its own.

Bit tricky to take good photos as it’s rather larger than the drawstring bags! So I hung it on the wall. 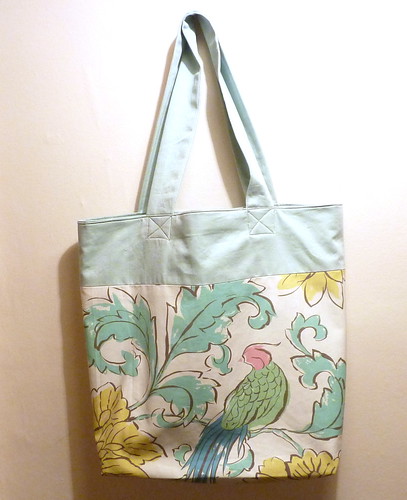 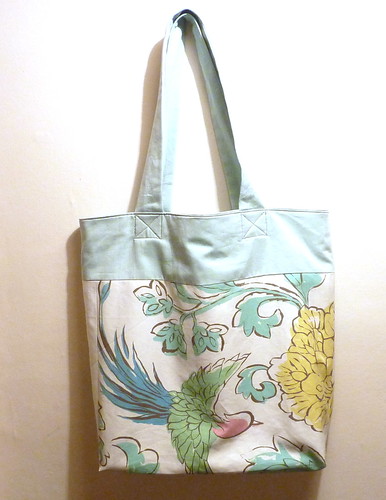 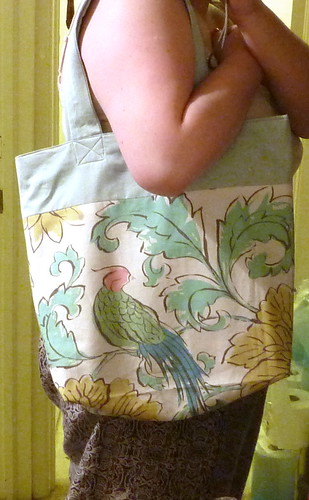 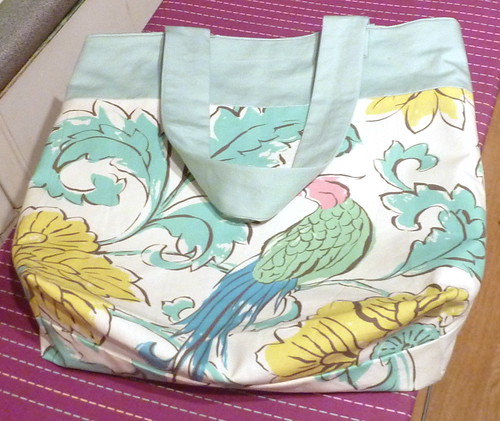 Those box-and-crosses to reinforce where the handles are attached took a fair bit of oomph from my machine to sew. There’s 6 layers of fabric there once you count the seams inside the handles.

Anyway, I think it turned out very nicely! Will have to make one for me from something. (I don’t have enough of the same print to make another).

These are something I’ve been working on. I’ve been wanting to have a go at pictorial/painterly beads for a while, and I started with birds of paradise because they have such beautiful plumage (and you can go off and make your own fantastical ones with ease once you’ve got started).

Here’s what I’ve been up to so far: the first pair I did off the top of my head. The blue one was the second and I wasn’t happy with the shape at all! The head came out much too big.

Version 3 was better. I do like the feathery fuzzing out I got at the side by superheating CiM hades. He’s perhaps a little vulture-shaped, though!

After that I went and found reference. I have a large collection of bird of paradise pictures now, arranged by species. I concentrated on Lesser Birds of Paradise to begin with, so the colours are reddish-brown, tan, yellow and white.

Version 4 (above) I got a bit over-enthusiastic with the feathers and the bird takes up rather a lot of space on the bead! I started doing green viney backgrounds too. This one’s fairly painterly in style.

Version 5 above is simplified and a bit sketchier. I rather like this one!

Version 6: looking back over his shoulder, a handsome fella! Fairly raised from the surface, this one. I want to start making the background darker green for this type.

I’m going to make more, including different species. Some of them have lovely patches of iridescent feathers: I’ll be breaking out the silver glass for those!