Posted by Kalorlo in Sewing on November 4, 2015

Here are some more bags for Beads of Courage that I made in October.

Two in green camo-print and another red car bag. 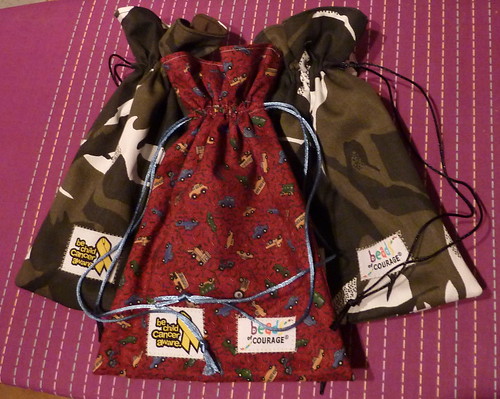 Here we have a swan, a blue and peach swirly feathery design (I have a fair bit of that, in odd-shaped long thin pieces – it’s an 80s possibly-wax-print fabric), and a gold on beige patterned bag. I really love the way that one looks with the burnt orange I used to line it. 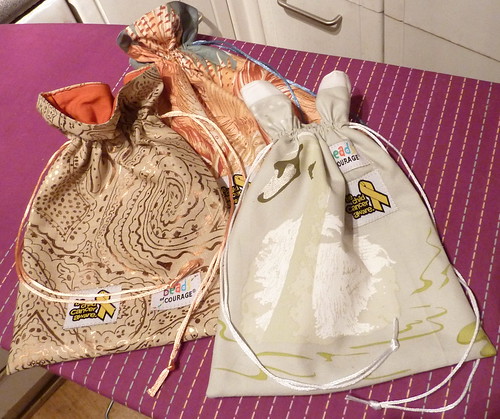 Rearranged so you can see the feathery one. 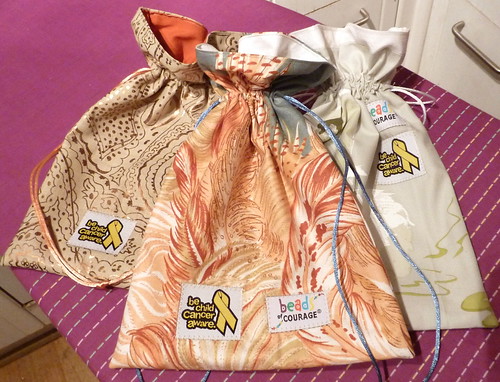 I’ve just received some Designers Guild kids range samplers (also Scrapstore), and there are some really lovely and cute pieces in there, so I will be making bags from those next.

I also made myself a new pincushion – since I have two sewing machines now, I keep finding my pincushion is at the wrong one… (My current pincushion is one I made at primary school – two squares of felt hand-sewn together). This is a Scrapstore fabric that I’m hoarding somewhat since I love the design, suns and planets on red – I decided to use a little bit of it to make something for me. 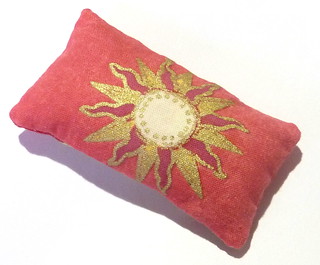 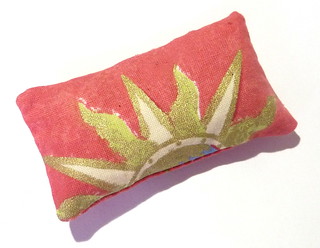 I stuffed it with thread offcuts – I keep those along with trimmed frayed edges and other tiny little unusable scraps in a box for this kind of thing. 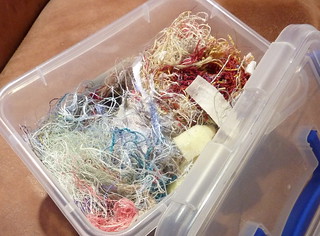 I also did a little experimenting with fabric paints – the ones I used here are Pebeo paints, but I also have medium to add to my normal acrylics, and I have some Procion dyes. Paint sits on top of the fabric so makes it stiffer – I thought of using dye for most of it and then possibly adding thin lines for illustration with paint, if I want to illustrate it. I was just doodling with this to see how the paint worked. (White fabric also from the Scrapstore). The frame is a quilting hoop that is very handy for this – I noticed that The Works had small hoops when I was there, so got a pair of those too for smaller pieces of fabric. 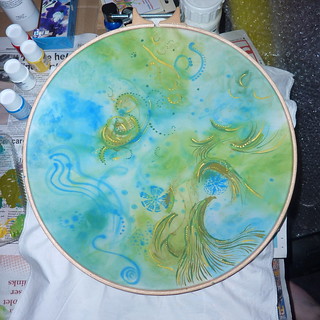 These are painted decals on a clear background, which are also rather fun to do.

(Fear not, there will be more bead and glass posts here too! I just have a slight backlog of nail art ones I wanted to put up).

A midnight blue purple with a satiny sheen finish. When I was wearing it as a single layer with no top coat, the satin effect was much less in evidence. Two layers and a Seche Vite topcoat, however… I like it a lot, it’s a good dark colour but with more interest than black.

Yes, I got some Seche Vite. I now know exactly why so many people rave about it, and also why some people have gone off it. It sets incredibly fast, hard, and stays so shiny. No risk of sheet crinkles being impressed in your nails overnight. However, it does shrink back. You can fix that for the tips by wrapping them (putting polish along the tips first before doing the rest of the nail in stripes as usual), but I find it shrinks back from the sides and base of my nails too, leaving a ridge that you can catch in clothing and will have all your layers of polish coming off in one. It seems to very slowly shrink over time too – not so much a problem on the first day, more of one after a few days.

I also got some Sally Hansen – Green Tea & Bamboo nail strengthener to use as my base coat. Dries a little slowly but seems to be doing good things for my nails’ growth speed and not tearing at the edges.

I made these feather decals with a white called High Maintenance – Milk. These are little polishes that are 2 for £1 from a local market stall and are made in China. The colours vary in opacity but they have some nice bright ones. Milk worked just fine for this application, opacity very good. The other colour in the feathers is Payne’s Grey acrylic paint, because I have misplaced my black nail polish. I always used Payne’s Grey instead of black when painting – just preferred it.

The decals have a layer of clear put down first, then I painted the feathers, then put more clear over the top. You don’t necessarily need to do that if you aren’t using any acrylics. The clear I used here was my Collection 2000 maxiflex. It isn’t a good one for doing this with as it sticks hard to the greaseproof paper and stretches rather when you try to pull it off. It also is slightly misty as a background rather than fully clear after you have done all this. These decals were made on Dec 30th and I used them on Jan 10th. The clear was getting a bit brittle by this point, but no problems using them.

I just did two per hand because I hadn’t made that many, or considered the size of them at all! Bit large for the smaller nails.

I think I will make a template of my nail sizes that I can put under my decals when I make them. Much easier to judge sizes that way.

You can see the edges of the clear if the light catches them right – it’s better to leave enough clear around so that the decal can cover your whole nail even if the picture doesn’t, but I made these all squished together.

I made these at the same time, but they were a present for someone so couldn’t show them until they had been presented :)

Soot spirits and little white Totoros. The set over on the right were made with a different clear and done on a ziplock bag, and came off so much easier than the others. The clear stays clear too. It was Saffron’s clear, which I also got at the market stall (made in UK, you can find masses from them on eBay alongside La Femme). £1 a bottle, works so much better for this – I’ll be using that in future then!