These are both very pretty transparents.

Limelight is a clean, cool green with no hints of yellow. Charlotte is a warm pink that is saturated enough to hold its own. I don’t think we’ve had anything else in 104 quite this colour (not counting CiM’s Paris, out at the same time and very similar). Both have a tendency to develop microbubbles, especially Charlotte – if you heat them further out they may get fewer. 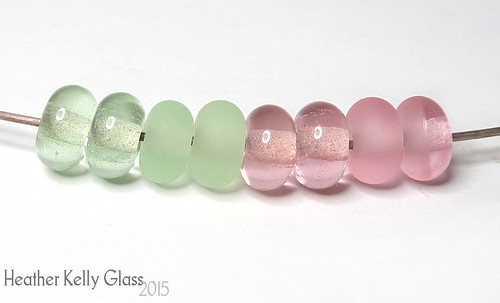 (The last Charlotte spacer was half out of the etching liquid on this side – I left it like this because I liked it). 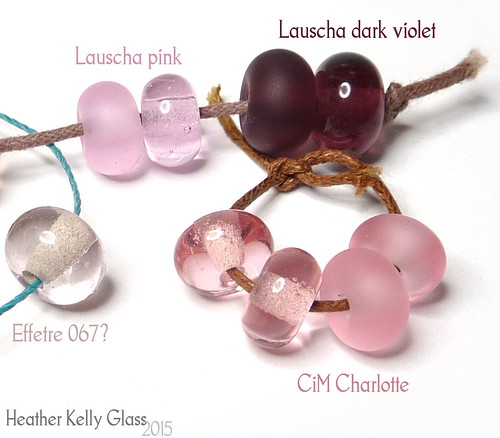 Here’s a comparison with a couple of other pinks I had to hand – Lauscha transparent pink is a baby pink and cooler in tone than Charlotte. I think the very pale one is Effetre rose quartz 067 – it is definitely Effetre, and their transparent pink tends to be a little peachier most of the time. You can see how well the colour shows in the etched Charlotte. I’d call this a cherry blossom colour. (The dark violet is just there because it was on the same string as the pink).

I then tried encasing silver glass with these transparents. I’ve been using Boreas for this for a while – it is a transparent reducing purple. This time I also added Luna 2.1 which is a mostly transparent striking colour. 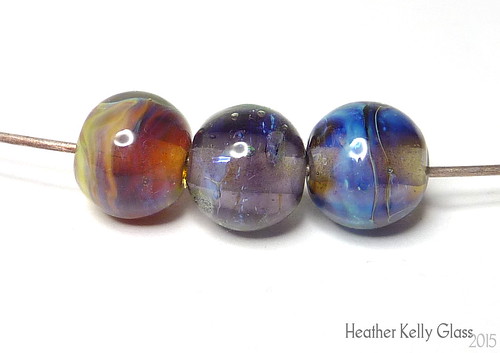 This is a core of clear encased in Double Helix Luna 2.1 (left) and Boreas (middle and right) encased with limelight. I did two with the boreas because I had an insufficient reduction moment with the middle bead. The limelight is pale enough that you don’t notice it much. There’s some good electric blue from the boreas on the right, and you can see the range of striking that Luna gets, from opaque yellow to transparent pinky purple. Probably not the best use for limelight, just because you can’t really tell it is there and it doesn’t appear to be affecting the silver glass. 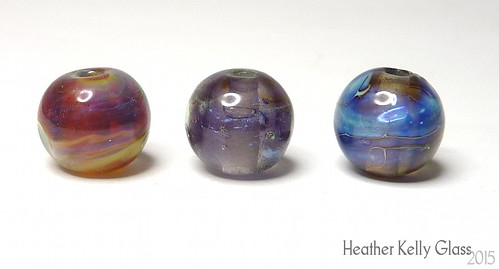 Above is a second view of the limelight beads. 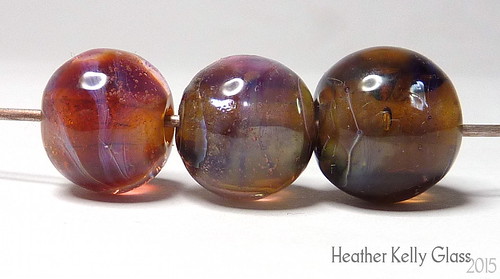 I did the same thing with Charlotte – this time I did two Boreas beads because the thicker encasing on the rightmost bead just ended up a murky green-brown. The middle bead has a thinner encasing and you can see some hints of pink at the top, while over the most reduced areas it is still the weird greenish colour. Silver tends to fume pinks brown – I don’t think I’ve ever tried similar with a transparent pink before. Luna 2.1 on the left is a better match – the pretty pink wisps inside go with the encasing. On the whole, you probably want this glass to look like itself rather than use it with silver glass though. (You can also see some areas of the microbubbles on these beads – once they’re there, you can’t get rid of them).