From Creation Is Messy’s September limited editions, I went for the selection of greens, oranges and browns first.

Here are the rods – we’ve got some striking going on here. 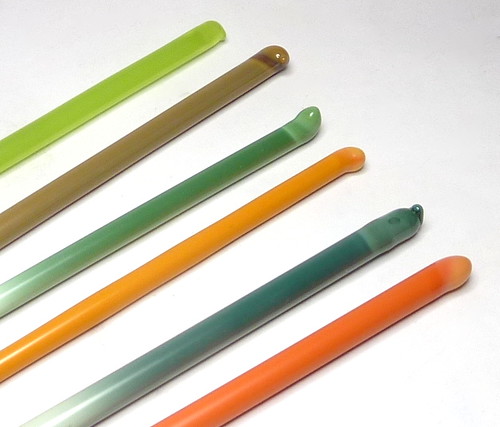 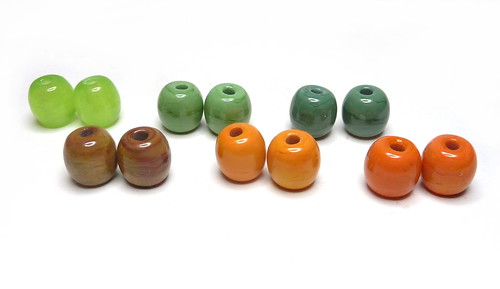 From left to right: Jelly Bean, Turtle Power and Juniper.

Jelly Bean is somewhat similar to Chartreuse in its glowing green, though is greener and less yellow, and is less transparent inside so the mandrel line is barely evident in these barrels. This is a soft colour when molten. Like many opalinos it can crack near the end of the rod when it cools, which is visible so you can melt it back in carefully when you next use the rod.

Turtle Power is indeed quite a turtly green. It is a middling green, neither bright nor muted, not too blue or too yellow. It comes out lighter than its rod and is streaky, as greens often are. Good organic kind of green. No rod issues.

Juniper is a darker, bluer green. Similar kind of tone – another good organic colour. Looks nice alongside Turtle Power, as they’re different enough to stand out next to each other. Again, it has darker streaks in it. I found the rod could be shocky when going back into the flame after cooling, and the first time in it peeled a bit at the cut end – it was fine when still a bit warm. When molten it was very smooth and viscous.

This trio of colours together makes me happy!

Canoe is a striking silver-rich brown like Canyon de Chelly and the ASK/Kugler browns. It has some lovely light and dark streaks, and can go a yellower or redder brown. The rod itself was exceptionally well-behaved, especially as I had a slightly thicker one. With silver-rich colours some shocking at the end is fairly usual, and nothing of the sort happened here.

Monarch is the lighter orange. The end of the rod has struck lighter still, but the beads have blushed more orange in places, which I love. Monarch had an air bubble running the length of the rod, so was a little shocky.

Harvest is a deeper creamy orange. It also has some darker and lighter struck areas, though is less pronounced than Monarch. The rod was very good at going in and out of the flame – no problems with cracking.

I did a pairing off that gave some nice contrasting colours. 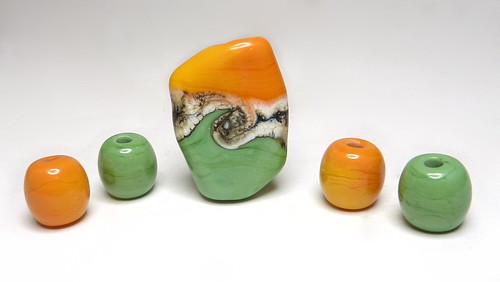 You can see the difference between the yellower- and oranger-struck areas of Monarch better here. There’s a dark reaction line between the swirl of Effetre New Ivory on the focal bead and the green of the Turtle Power, as you’d expect. No line on the Monarch side, just a fuzzing out. 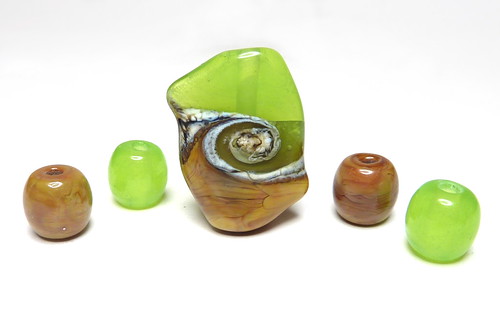 This pairing got a horizontal compatibility crack where the Canoe was deeply encased by the Jelly Bean, which is a shame as I really liked this colour combination. (I don’t think it was the New Ivory’s fault, though to be sure you’d need to test without it. An opalino over a silver-rich glass is a risky proposition). Replace with a transparent green for safety here, I guess. You can see the variety of shades the Canoe can get. When adding the New Ivory, it seemed to spread into the Canoe and not into the Jelly Bean. It has added some especially dark caramel tones on the border with the Canoe. You can see the mandrel line in the pressed Jelly Bean, but still see how far from transparent it is – gooey and misty. 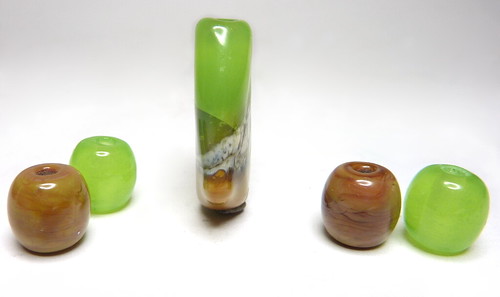 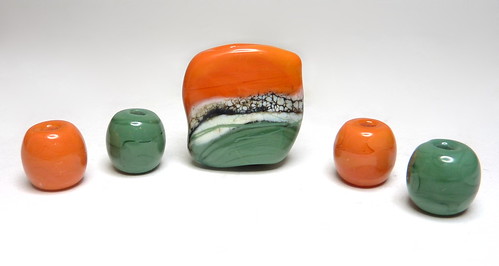 Nice combo – the more muted Juniper isn’t fighting with the bright Harvest. Handy pumpkin colours. There’s quite a lot of black webbing in the New Ivory and a dark line between it and the Juniper in only some places.